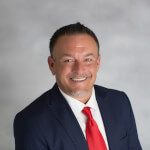 Christopher started in the staffing business 21 years ago working as a temporary employee. He was eventually asked to help out internally as a filing clerk and receptionist. He moved to recruiting within a year and worked a desk for 15 years before becoming operations director. Christopher loves being able to see everything come together and function well. He says it’ s like watching a well-oiled engine running smoothly. He’s a numbers person, so stats, kpo’s and financial evaluation give him that warm and fuzzy feeling… most of the time. Christopher studied business at University of Texas of the Permian Basin.

In his spare time, Christopher likes to remodel houses, exercise, and read murder mysteries. He also loves working in the yard and watching the plants he’s groomed grow, bloom and become something beautiful. He enjoys playing with his two Sphynx Cats, Cinnamon and Gnocchi and his dogs, Clover and Mulligan.

His favorite superhero is: Wonder Woman

When he was 8, he dreamed of being: Veterinarian

Login to save this search and get notified of similar positions.

There are currently no related jobs. Please sign up for Job Alerts.
Loading...
Login to save this search and get notified of similar positions.

I am more than “…pleased” with the services and placement of employment by Energi Personnel. Energi Personnel seemed to focus more on the following: 1. References. 2. References and work history as related to placement. 3. Tapping basic skills and enhancing in position to conform to the processes.

Great temp agency! Best in Odessa! best I’ve ever been too!

Grateful for the opportunity to work with a company that was flexible and help me learn new skills that I can utilize with future companies. Always helpful during my employment with the company.

EnergiPersonnel is a small shop one in Odessa and one in Midland and they are super successful and when they tell you that FAMILY is number 1 that is exactly what they mean.

I really appreciate that Energi Personnel found a job for me in a very short time. They have passion for their work, and also care about their clients.

Energi Personnel is awesome! During our meeting she took the time to get to know me & what I was looking for. She worked her magic and had me placed in a perfect setting w/in days. Posted by Christopher ChristensenDecember 30, 2020
The year 2020 was one for the books. It started off strong, but by February, the job market looked shakier…
Read More Safety Tips from Health Experts When Returning to Work

Posted by Christopher ChristensenDecember 23, 2020
COVID-19 and the associated restrictions changed where or how everyone performs work. Whether you now work at home, your industry is…
Read More Posted by Christopher ChristensenDecember 16, 2020
The year 2020 is over finally! No matter where you are in your career, the past year s events probably…
Read More

Call Us
Text Us

Keep Up to Date

Get updates and news delivered to your inbox.